Every month we scour the web to find the most interested fishing stories in the world. Usually, we share the links in-house, but this month we decided to share our team’s favorite links on this blog.

These were our favorite stories this month. If there’s a story you think we missed, comment below or message us on our Facebook Page. Enjoy!

Observed at a staggering depth of more than 8,000 feet below the surface of the ocean, scientists think they may have found a new species.

The small wriggling creature is a snailfish and comes from the family Liparidae. For having been found at the depths of the ocean, the snailfish is unexpectedly cute, more resembling a small minnow than one of the ocean’s deep creatures…

This kid catches one helluva carp in Vermont, WOW! 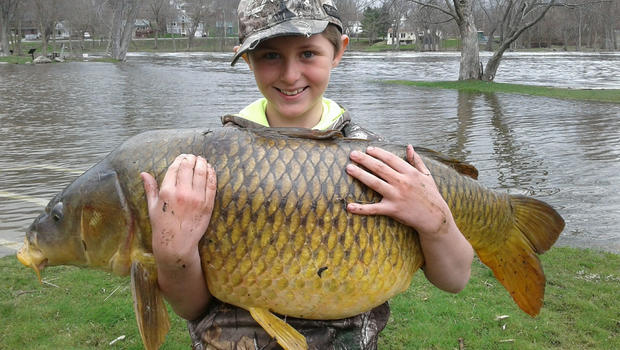 A 10-year-old who reeled in a giant carp says he knew it was a record contender before he ever got it ashore.

Chase Stokes’ fish did indeed set a state record in Vermont. It weighed in at 33.25 pounds…

Valdez resident, Frieda Wiley, spent 45 minutes reeling in a 374-pound Halibut that not only made her the new leader in the Derby, but it is also the largest Halibut on record in the history of the Valdez Halibut Derby.

Wiley was originally planning to go fishing for Silver Salmon, but when her husband had to cancel, she took his place on the boat which led to her bringing in the 7-and a half-foot monster fish…

What’s tougher… performing surgery or reeling in this massive fish? Check out this surgeon’s giant catch. It turns out the steady hands of a surgeon can do more than save lives. They can also catch a record-breaking fish…

This kid was so happy he caught his first fish. And then he got really sad because a sneaky snake tried to steal it from him.

Big fish flips a fisherman’s canoe… and of course, it’s on film

When you snag a giant fish like that, you hold on… no matter what. Even if that means you’ll be taking a dip. Good job, guys!

Comment below with your favorite fishing stories over the past 30 days.